Whippets are the most wonderful breed… of course I’m biased since I’m a Whippet owner. They’re fun-loving and full of love. They have their own little quirks and characteristics, which I’ve come to adore. So in this article I’m going to tell you 17 facts about Whippets that explain why I‘m so hung up about them.

Whippets are super-fast runners. At one time they were known as “the poor man’s racehorse.” As a Whippet owner I never tire of watching my Whippet Misty going through the gears to chase her ball!

Like all sighthounds (and unlike all other breeds), Whippets have a “double suspension” gait. This means they have full extension when they run: their front legs extend ahead of them and their rear legs extend behind them. During full extension, none of their paws are in contact with the ground.

Despite being super-fast runners, and contrary to what people imagine, Whippets don’t need an extreme exercise and they’re not always on hyper mode!

I exercise Misty between 45 minutes to an hour each day. That might 2 x 30 minute walks around my neighbourhood on the lead, or her preference, an hour running around a field chasing her ball.

Whippets also enjoy playing at home: a tug of war with a favourite toy or playing chase with you in the garden.

Find out more detailed information about how much exercise a Whippet needs.

When they’re not at play, Whippets are happy to snooze on a comfortable chair… so much so that many people say they’re couch potatoes!

3. Whippets Tend to Shiver a Lot

Many people think that Whippets are a little fearful because they have a tendency to shake and shiver. Like most dog breeds, Whippets will of course tremble if something frightens them, but this doesn’t mean they’re scaredy cats… erm, scaredy dogs!

Healthy Whippets don’t have a lot of fat. They’re also thin-skinned and have a single coat so they are especially sensitive to cold. This is why they’re not overly keen on winter walks, when they need to be wrapped in Whippet sweaters or coats.

Whippets also shake when they’re excited. I see this most often when I’m driving Misty to her favourite walking spot: she knows where we are headed and begins to shiver in anticipation.

4. Whippets are Meant to Look THAT Skinny

A typically healthy Whippet looks underfed to most people… but that’s their look! Healthy Whippets weigh between 6.8kg to 19.1kg (15 to 42lbs)… males tend to be heavier than females.

The American Kennel Club says that Whippets at a healthy weight should have two to four visible vertebrae… anything more than and it’s underweight, anything less and it’s overweight.

Some people don’t like this look and imagine that Whippets are bony and awkward. For me it’s a look I adore: they look elegant and refined and they’re actually way more cuddly than you might think!

Okay this one’s a very general Whippet fact and of course all dogs are different. However must Whippet owners I know say the same thing: Whippet’s don’t smell very much!

Some dog breeds have thick oily fur and shed heavily. Breeds like this require bathing more frequently than short-haired Whippets.
You needn’t bathe a Whippet if it doesn’t smell and has a clean, silky coat. However, some need more bathing than others. Our Whippet Misty regularly goes months without bathing although during the wetter months when it’s muckier out, she definitely requires more regular bathing.

I do not like it when dogs drool… it makes me feel a little queasy. Dog breeds such as Bloodhounds, Mastiffs and Saint Bernards have lots of skin around their lips and snouts, in which saliva collects… hence they drool.

I have never seen my Whippet drooling in this way. They don’t have lots of skin around their muzzles and so don’t have the same tendencies as the breeds I’ve mentioned above.

If you like a non-smelly dog that doesn’t drool, you’ll love Whippets!

Whippets are extremely social dogs when it comes to humans, and they thrive in the company of their loved ones. As a result they don’t really enjoy being left alone for long periods.

It’s said that a happy, healthy and well-adjusted Whippet can be left alone for up to 8 hours. For me, I’d never leave any dog alone for that long and my own view is that a Whippet will suffer more from loneliness than some other breeds.

Our Whippet will happily stay home alone for 4 hours as long as she’s had some exercise beforehand. Any more and there are signs in the house she’s not happy:

As a social breed, Whippets need company: either the availability of their co-habitants or another Whippet for companionship!

8. Whippets and Cats Don’t Get Along

I’ll say this again… Whippets and cats do not get along! Whippets are sighthounds… and as such they have a natural instinct to chase running animals.

When Misty was a puppy we also owned a cat. At first this wasn’t a problem because our adult cat could outrun a Whippet puppy. However, as Misty grew she became much faster out of the blocks and we could foresee a time when there would be a problem.

Try as we might, we couldn’t suppress Misty’s natural tendency to chase things that moved suddenly, so we decided it would be best for our cat to live with a neighbour.

If you have a cat and decide to get a Whippet… you may have to choose between one of them.

As a rule, Whippets don’t bark very much… in fact they’re quite famous as non-barkers. However, this is a general rule.

Our Whippet Misty DOES bark:

Most of the Whippet owners I know tell me their Whippets rarely bark… so I believe we are in a minority!

10. Whippets Love Sleeping in Your Bed

Whenever I meet a Whippet owner one of the first questions they’ll ask is if they sleep in your bed with you at night!

Whippets love sleeping with you at night… and will burrow deep under the covers. They love warmth and love closeness with people.

At first we were not keen on this and tried to train Misty to sleep in a basket. We were successful up to a point: she always fell asleep in her basket but we’d wake up to find her in our bed under the covers!

As I’ve said previously, Whippets are very clean and don’t slobber so we don’t find this a problem.

11. Whippets are Great With Kids

Whippets are medium sized dogs, which makes them great pets for most homes. They love people but especially children, who will tend to make a lot of fuss over them.

Whippets love lots of fussing over them!

As Whippets are not aggressive, they’re ideal family dogs. They don’t tend to snap if children are being a bit loud, indeed they may well go off to find a quiet place.

As long as you give Whippets sufficient exercise and play they shouldn’t be too rambunctious either!

12. Whippets Have a Lovely Temperament

Whippets are loving, gentle and more often than not quite quiet. As I’ve already mentioned, they are more than content to lounge around on your furniture dozing if they’ve had exercise.

My Whippet happily snoozes for most of the day, breaking a dozing session off only for a toilet break or when she’s hungry.

Whippets generally get along well with other dogs and their inquisitive nature means they’re always happy to make new human and canine friends!

13. There are Dozens of Different Whippet Mixes

There is a huge variety of Whippet mixes and each has a delightful name:

Like all dog crossbreeds, Whippet mixes retain characteristics of the parent breeds. For me this makes most of them physically adorable… just like purebred Whippets!

Whippets have a very graceful physique: a slim, muscular body and deep chest. They look like they are made to run… which they are! However, as with all sighthound breeds, their long neck requires a special collar.

Most owners will tell you that their Whippet will try to chase anything that moves suddenly and quickly if it catches their attention. If this instinct kicks in while a Whippet is on a lead, a regular thin collar can result in injury.

Whippet collars need to be wider than regular dog collars to avoid such damage and reduce pressure on the throat area.

Want to know more about Whippets? Check out my Whippet dog breed information page to find out everything about this lovely creature!

Do you have any interesting facts about Whippets I haven’t shared here? Leave a comment below and let me know!

This page may contain affiliate links from which I may make a commission at no cost to you. 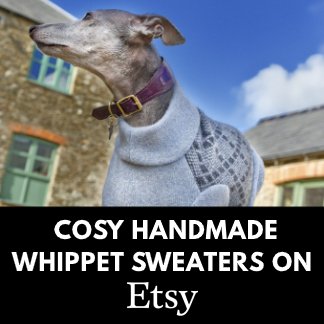 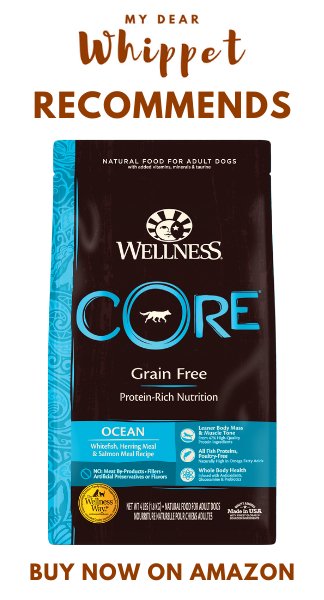 This website is a participant in the Amazon Services LLC Associates Program, an affiliate advertising program designed to provide a means for sites to earn advertising fees by advertising and linking to Amazon.com.

Find Us Here Too